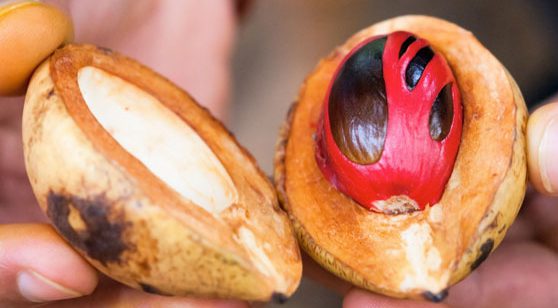 The Banda Islands are a small group of islands located in the eastern part of Indonesia surrounded by the deep Banda Sea. One of the first inhabited places on earth, some 8000 years ago, it was the only source in the world to find the highly valued spice, Nutmeg.

The Banda Islands, also known as the “Spice Islands“, was an elusive place for centuries. Everyone in the world, including Christopher Columbus, was trying to find them. Traders did not divulge the exact location of the source of Nutmeg and no European was able to deduce the location until the Portuguese found it in 1511.

In 1602,  the Dutch formed the Vereenigde Oostindische Compagnie (VOC) (the ‘Dutch East Indies Company)  to monopolize the spice trade from The Banda Islands. Many bloody years ensued in the fight for control of the islands between the Dutch, the British and the Bandanese people.

In 1621 the Dutch took control to monopolize the trade of Nutmeg.the Dutch with Japanese mercenaries butchered and beheaded over 13,000 indigenous people leaving less than 1000 survivors.  The VOC then imported slaves, convicts and indentured laborers to work the nutmeg plantations. The agriculturally productive lands were then divided into 68 1.2-hectare perken and handed over to Dutch plantation administrators known as perkeniers. With the monopoly in place, the VOC and perkeniers quickly became wealthy, building opulent Villas in the main town of Bandanaira.

The Dutch once colonized New York (New Amsterdam) but in 1667 they traded it under the Treaty of Breda for the British held island of Palu Run. The smallest of the Banda Islands, Palu Run is considered the genesis of the British Empire.

The 2100 ft active volcano Gunung Api on Banda Api juts out of the very deep Banda Sea creating The Banda Islands, and has erupted frequently throughout history. Banda has also suffered from many earthquakes, hurricanes and tidal waves. In 1778 an eruption, earthquake, hurricane and tidal wave destroyed the islands and left the perkeniers bankrupt.